Ever since the quarantine began, I have been thankful.
Of course I'm scared, worried, annoyed, inconvenienced, and generally freaked out like most people I know. But I have been comparing our situation to those of other people who have faced difficult times. Refugees whose world has been uprooted and have nowhere to call home. People in war-torn countries who have to worry about bombs or gunfire.
Last night I thought about Anne Frank, "quarantined" with her family. Stuck inside. Knowing that the outside world was dangerous, even deadly. Not being able to plan the future. Wondering if they would ever get back to "normal." Trying to continue living while everything is different.
I never thought I'd be in a situation where people who have endured tragedy could come into clearer focus. Of course my situation is completely different, but I find myself a tiny bit more able to understand how she might have felt.
And from day one of this pandemic, I have told people over and over how good we have it. Of course there are people who are losing their homes, have lost their jobs, have lost family members. Of course some people ARE facing tragedy.
But most are like me. Definitely impacted. Definitely scared about the future. But scared while sitting in a nice house. Scared while able to write on a computer and talk to other people. Scared while ordering groceries to be delivered. Scared while driving to a workplace that follows safety rules and does their best to keep everyone safe.
Scared while having to watch entitled, egotistical, uneducated people refuse to wear a mask.
I am so sickened that so many people only live in their little bubble-view of the world - have never opened their minds enough to see that the world does not revolve around them. They are annoyed that their kids have to wear masks, annoyed by having to follow rules, annoyed that they are inconvenienced by the pandemic.
It's such an inconvenience for them.
An inconvenience.
No more words.
Posted by Shannon at 7:40 AM No comments:

Can You Tell I'm Smiling?

We all know that 2020 has been tough so far, at least since March. The pandemic has taken away so much from us. But recently I noticed that something small, but meaningful, is missing. It’s our smiles.
When I go out, I smile all the time at people, and I like getting smiles in return. It’s my small way of communicating to strangers, from big thank-you smiles to the small corner-of-the-mouth twitches that show recognition of others.
Now, half our faces are covered in masks, and who knows what the other person is “saying” to us. Are they friendly? Who knows? Annoyed? Who can tell? We all thought the eyes could say so much, but actually they are nothing without the accompanying mouth.
I usually am a big smiler. Strangers comment on it. I like to be friendly.
But now, with my face covered, I tend to keep my eyes down. Why look at someone when they can’t see that I’m doing more than just staring?
I look forward to the return of smiles…
Posted by Shannon at 3:09 PM No comments:

A few weeks ago, I was lucky enough to find myself lying on a beach. Because I didn't have a lounge chair, I ended up lying on my side with my hat atop my ear to block the sun.

I never looked at the ocean from this vantage point before. The hat blocked the sky, leaving only a strip of blue stripes. Everything became abstract - a stripe of tan sand, bluish textured stripes of colored water, and a smooth blue stripe of sky.

But what was mesmerizing was the sparkles. I even had to sit up and look at the normal view to confirm what I was seeing. Of course the sun sparkles on the water. It does all the time.

But lying there, looking at my sideways abstract view, the sparkles on the water were incredible - blazing in the scene like diamonds. I found myself amazed that everyone at the ocean didn't just sit and stare at the sparkles.

I wonder what else I would marvel at if I just changed my vantage point now and then?

Posted by Shannon at 9:16 AM No comments:

Lately I've gotten into a habit of taking photos of Las Vegas skies. And they can be pretty magnificent. Perhaps they intrigue me because so much of the summer here has cloudless skies, and the expanse of blue gets monotonous.

But when there are clouds, that when they call to me. I can't stop looking at them. I hold up my phone while I'm driving and click away, hoping to capture them.

The Vegas skies used to annoy me. Coming from the green Midwest, I was used to trees enveloping me, only allowing the sky to peek through. The desert skies seemed too wide-open, harsh. I missed my green home. When I traveled back there to visit, the green was almost overwhelming.

Brown used to be the color I chose to describe Las Vegas. It's not a lush desert like further south. It's a brown place to live. But after letting go to the skies, I find them taking over my impression of this land.

Now, this is a place of blue.


It took a long search online to find a photo that would convince my six-year-old son to trim his hair. His last cut was nearly a year ago, and after it he was adamant about letting it grow long. "I want to have to do this!" he said, sweeping his imaginary hair out of his eyes. So it grew and grew, and even though it was often a bit shaggy, I liked it.

My mom taught me to like men with longer hair. She grew up with The Beatles, and her taste in men's hairstyles grew with them. She loved John Lennon (not just for his hair, but it was a plus), and I remember her watching tennis just because Bjorn Borg was playing.

Now when I see men with longer hair, I can't help but feel sentimental toward them. They seem more sensitive, more artsy, more carefree...like they are friends of Mom.

My son did finally trim his hair, but as we walked out of the salon he told me it would be another year before his next cut. And that is fine with me. 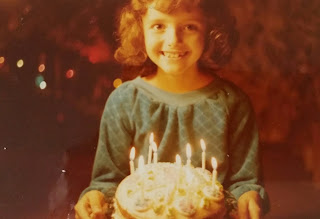 I suffer from a condition that plagues many women: The Curse of the Confident Woman. It hits us when we are young girls, when we are young and confident, and its effect determines whether or not the girl's confidence will grow or if it will be squelched.

I believe that all children inherently believe in themselves at first. It is the outside world that teaches them otherwise. But the moment when girls begin to lose that belief happens around age 8 or 9. This is the time when they find their voice, when they aren't afraid to speak out about every little thing they are thinking and feeling.

I never realized this until I was at my Grandma's house one day as an adult, and she played a recording on a cassette tape of me when I was that age. I was loudly singing "Love Will Keep Us Together," and in between choruses I talked loudly and confidently about how great girls are and how much we know.

And while I listened to this, I realized I was embarrassed. My family sat around, patiently listening, amused. But I felt embarrassed by the loud, confident, 9ish-year old me.

And that was crazy! Why should I feel embarrassed? I was loud and confident. What I was feeling was the exact thing that probably squelched my enthusiasm and confidence not long after that recording. I'm sure I was taught by society that girls should be more demure and modest.

Although I may have learned not to shout my virtues, I must have retained a bit of my bravado. I learned this when it came to relationships. When I was in high school, a boy never asked me to the prom for any of my four years of high school. In fact, most boys didn't act interested in me at all (partly due to my extreme lack of confidence with boys, but that's another story). When I was a Senior, I lamented this fact to my Senior English teacher, our beloved Mrs. U, and she told me, "Well, it's because you're too bossy."

Hmmm. Too bossy? I remember I didn't like hearing that I was bossy, but at least it gave me a reason.

Then in college there was a boy I liked. He was a music major and looked like Michael J. Fox, and he and I would spent hours in the music lab while he played albums for me that he liked. We had so much fun together. When my friend told him that I was interested in him, his response to her was, "She's too headstrong."

Hmmm. Too headstrong? Bossy I could take, but headstrong? Suddenly, I didn't see him in such a favorable light.

The recent awakening of the women's movement has brought back all these memories. For too long, women's opinions and confidence has been squelched. (Yes, I like using that word.) Finally, with the momentum of the women around me, I can state to the men in my life that I will no longer listen to jokes with women as the punchline. No, I will not watch The Godfather, because the chauvinism in it has always made me sick. I will stand up to the behavior that is finally being acknowledged as unacceptable.

So, call me opinionated. Call me strong. Call me bossy. And headstrong. It's no longer an insult.

Are You Here, or Present?


Whenever I hear a teacher call the roll, I am always taken back to Kindergarten, when Mrs. Schmucker told us that when she called our names, we could answer, "Here" or if we liked, "Present." But as a five-year-old, I didn't know what present meant. I always pictured a gift wrapped in colored paper with a big bow on top. But that didn't make sense, so instead, saying Present was exotic.

Most kids answered "Here," as did I. But a few brazenly answered "Present." Those kids were pretentious. Why couldn't they just say "Here" like the rest of us regular kids?

Looking back on my attitude about those kids, I realize that I spent way too much of my life only saying "Here" instead of joining the bold kids in their confidence.

Midwesterners are taught not to brag...not to act "too big for your britches." You shouldn't imply that you're better than anyone else.

So, I have always found it difficult to toot my own horn. Job interviews and networking, in which I am supposed to do just that, are hard. It is so hard to ask friends or anyone for connections that could help me advance...it feels cheesy and fake to do that. I sure wish I had learned at an early age how to play the game. I don't want to merely be "Here." I want to be present!

Older Posts Home
Subscribe to: Posts (Atom)
ALL my images and text are Copyright Protected and may not be used for any reason without express written permission. © Shannon Cangey All Rights Reserved.