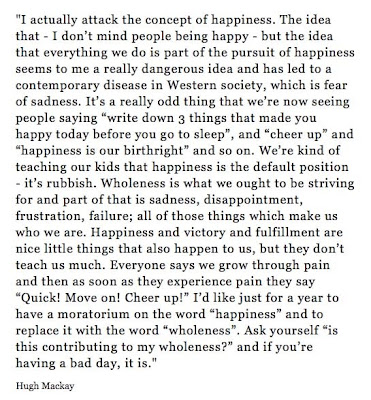 This quote was on the internet recently, and after reading it I realized it made me feel calmer. It eloquently says exactly how I feel, and what I have written about on this blog once before. Our society is too happiness-driven.

Of course happiness is great, but why do we have to imply that someone is a failure if they’re not perfectly happy? Pressured by questions such as “does my job make me happy,” “am I doing what I love,” “how often do I feel joy,” and constant lessons from Oprah for Living My Best Life, it seems that we are supposed to make constant happiness our primary objective.

I often think back to issues from my childhood and early adulthood – incidents that make me cringe in embarrassment or regret – and focus on trying to heal or forget them. I want to forget the bad times and move on and become fulfilled and get to a happy place in life. The above quote helps me do that.

Instead of forgetting the bad and trying to leave behind the person I used to be, the idea of embracing those times, and that person – accepting those negative things that make me who I now am – comforts me more than the search for happiness ever could.

Trying to be constantly blissfully happy seems trivial, while encompassing the idea of wholeness gives me a mental picture of taking a big breath and relaxing. Wholeness is a deeper state of being.

So stop trying to be so happy! Are you whole? Relax and let it be.
Posted by Shannon at 9:29 AM 1 comment: 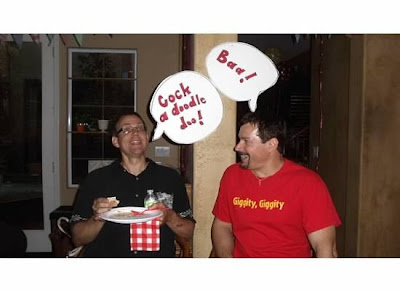 I went a little crazy for my son’s birthday party this year. But anyone who knows me knows to expect that. If I have the motivation and the energy, I will go all out.

We used to be a fairly social couple and liked to have people over for dinner now and then. But ever since our son entered the picture, we’ve just been too tired! Now, if people come over we usually order pizza or just talk while we sprawl exhausted on the couch.

So my son’s birthday is the perfect excuse to go all out one time a year. We invite everyone we know and use his special day as a way to see all the people we now don’t see as often.

Last year’s theme was ducks; this year’s was Farm. And my new favorite thing is foam core. I painted farm animals on it and cut them out and hung them around the room. I cut out animal noise quotes to put above the seating in the room (see above photo), which made me laugh out loud when I got the idea, and even made a playhouse-sized barn out of it for the backyard. (This foam core came in 4’x8’ sheets and was free and leftover from one of the local convention centers. It was used for signage but was blank on the back; they would throw it away if I didn’t take it!) The food was themed, too, as well as the wine we offered – Dancing Bull, Lucky Duck, Three Horse Ranch, and Rex Goliath.

Jude loved his party. I wasn’t sure how he’d react after his nap when he found the house full of people, but he just stood around for a while, watching everyone, and whenever anyone laughed he would laugh loudly and jump up and down in excitement.

The best part was the rain, which poured down for much of the party. Remember, this is the desert, so rain is exciting! We stood under the patio and watched it fill up the yard, and Jude ran out into it and had to change clothes twice.

That night after everyone was gone, he took one of his new trucks up to bed with him. We tucked it in under a blanket and told it “night night.”

I’m already dreaming up themes for next year’s party!
Posted by Shannon at 1:37 PM No comments: