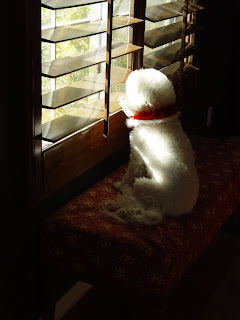 We had twenty-four people at our house for a Christmas buffet on Saturday. Or to be more specific, we had 16 adults, 7 kids, and 1 baby. Writing this, I wonder at what age we start counting a baby or kid as a full person on a guest list...when they can walk? When they can eat a full meal? When they can contribute to conversation?

There was also one dog at the gathering...George, of course. In the early morning, George saw signs that people were coming over soon. We were in the kitchen early, moving constantly, cooking and clanging dishes. When George wasn't under our feet waiting for crumbs to fall, he was at the front window waiting for cars to pull up.

George's perspective of our get-together must have been confusing. Instead of getting his afternoon nap, he saw the house fill with feet and noise, then he chased kids from room to room (and humped them when the opportunity arose). Instead of having quiet, cozy time on the couch, he was petted by strange hands and fed crackers by a sly three-year-old. After the last person left four hours later, and after the mountain of dishes had been surmounted, George crashed with us in front of the TV, too tired to look up.

We were tired, too. I hadn't sat down or even eaten during the whole thing, fueled by adrenaline that kept me filling glasses and monitoring the activity in each room. I guess the fun of hosting a party is watching everyone else have fun, right?

And like George, we crashed on the couch, satisfied with our foray into the Christmas Party scene. 16 hungry adults, 7 hyper kids, 1 spitting-up baby, 1 spastic dog, and us. I'm glad we have a year to rest before the next one.
Posted by Shannon at 5:43 PM No comments: 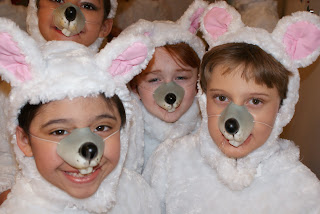 This weekend, in the middle of Tech Week of Nevada Ballet Theatre’s production of The Nutcracker at Paris Las Vegas, I managed to find a few minutes in my schedule to sit in the audience during dress rehearsal and watch a bit of the Battle Scene in the first act.

Onstage, Clara fell asleep after parents’ Christmas party and the stage went dark, causing creepy shadows to fall around her. The music became sinister, and Drosselmeyer swirled his cape as Clara’s dream began. Then from a corner of the stage, a tiny mouse – a five-year-old child in a fluffy mouse costume – scampered across the stage, ran around Drosselmeyer and his cape, and then exited to the opposite side. And I began to cry.

Okay, I didn’t sob or anything, but the tears sure welled up.

I’ve always been a crybaby when it comes to live theatre or any type of live event that brings people together. When Jim Nabors sings Back Home Again in Indiana at the start of the Indy 500, I cry. When amid thousands of stranger in the stands of a baseball game who all stand together silently and respectfully for the National Anthem, I cry. And the Opening Ceremony of the Olympics? Forget it…I am a mess the whole time.

And sitting in the audience of a live performance always gets me (if it’s a good show, of course). There is a special magic in the air, when the composer’s creativity, the orchestra’s mastery, the performers’ enthusiasm, and the audience’s awe combine to give us…well, the best of humanity. In this age of automated phones, texting, TV, and mindless video games, we need more chances to come together and celebrate humankind’s creativity.

I sat in the audience this weekend, my eyes filled with tears, as the stage filled with tiny mice who scurried in well-rehearsed circles and fell to the ground and shook their feet in the air in fear of Drosselmeyer. These were the kids who had looked at me wide-eyed from their makeup-covered faces as they waited patiently in a line for their entrance. I adjusted their mouse ears and helped them find their lost ballet slippers. I marveled at their parents who volunteered hours of time to coordinate and corral a cast of 100 kids during the lengthy rehearsal process. This was the kids’ first live performance, and they were on the same Las Vegas stage where countless celebrities had entertained thousands.

I looked over at the Director who was giving notes over the microphone and hoped he wouldn’t look over at me. The Artistic Director of NBT also sat nearby, and I prayed he wouldn’t come talk to me and see my tears. But I couldn’t help my emotion – not only was it these kids’ first experience in the theatre, but it was also the show that my Mom took me to every Christmas – the music alone can bring me to tears because it encompasses all the memories and magic of Christmas.

I may be a slightly jaded ex-professional singer/dancer, but the magic of theatre still gets me. And I’m so glad that these kids are lucky enough to experience it.

I wish you all some tears of joy during this holiday.
Merry Christmas.


p.s. I watched the whole production on Sunday night and cried every time a new group of kids entered the stage. Boy, I’m a mess.
Posted by Shannon at 9:39 PM 2 comments: 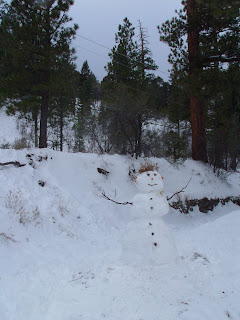 I hate cheesy, overly sentimental stories that are written solely to make the reader get all weepy, but this is the time of year when TV movies, shows, and radio programs pour on the sappy sweetness. In spite of myself, I have an appropriately heartwarming story for you.

My birthday was this weekend, and I reminisced about past birthday celebrations and tried to pick out my favorite memories. One of my favorites was when I turned 18 in London, and my aunt & uncle took my cousin and me to a Mexican restaurant in Leicester Square, where we celebrated my legal status with sugary margaritas and rides on the carnival attractions outside.

But the most touching birthday was when I was in high school and turned 16 or 17. My Drama Club had a Traveling Troupe that performed at local business clubs and organizations and took an annual trip to Madison State Hospital, a mental hospital where we met the patients and performed in each ward, sometimes with the doors locked behind us. We met shy teenagers who reminded us how lucky we were in our relatively-normal lives, sang songs in dingy rooms of senior citizens who joined in our choreography if they were so moved, and sometimes received marriage proposals from patients who hadn’t seen women in a long time. It was an eye-opening, meaningful trip for us privileged teens.

We happened to make that trip one year on my birthday, and we sang Christmas carols in a ward full of patients who had a tiny Christmas tree perched atop the piano. After our set of songs we mingled and greeted the patients, and someone happened to say that it was my birthday. This was great news to them. A man took a seat on the piano bench and played Happy Birthday while everyone sang to me. I sat on the bench next to him and smiled, surprised by the sudden attention.

A nickel. It has to be the most selfless, meaningful, valuable gift I have ever received. I kept that nickel for a long time.

This year, to celebrate my birthday we went up to Mt. Charleston to build a snowman. He had curly “hair” on the top of his head, stones for eyes, and a small carrot for his nose, and we left him there in the forest to survey a nice view of snow-covered trees. He is probably covered in more snow by now, and I wonder if an animal has eaten his nose yet.

For my birthday, we also went to a movie, went out for high tea, and ate dinner at an expensive restaurant. But the simple snowman is what I’ll remember.
Posted by Shannon at 10:55 AM No comments: 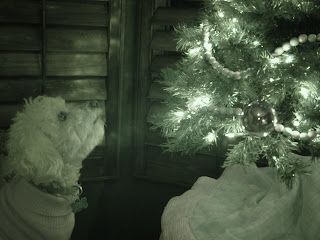 On Sunday we decorated for Christmas, and now the house has that festive vibe and a faint smell of pine. George spent the day following us from room to room as we unpacked boxes and climbed up and down ladders, and he finally fell asleep under the table during dinner because he didn’t get his usual afternoon nap.

I hadn’t planned on buying a real tree this year. Tired of the same decorations going in the same spot every year, I thought I would just make do with the small fake tree we usually put in the dining room. But at Home Depot on Sunday morning I had to walk past the area where all the trees were displayed and employees were cutting and wrapping trees, where families were picking out the perfect one to tie onto their car and take home.

It was the smell that got me - that sharp pine smell that suddenly made it feel like Christmas and put a warm, cozy feeling in my belly.

So I bought a tree in Home Depot. A small one that we put upstairs on a table in our TV room to be different this year. It’s short and fat and fun, and we covered it only with the ornaments we’ve bought when we’ve traveled, to make it personal and different.

Picking out a tree has to be at the top of my list of favorite holiday activities. It was always fun to go with Mom to the tree lot in the freezing cold and pick out just the right one. When I was little, my Grandma used to cut down a tree from the woods behind their house – usually a cedar whose branches were so flimsy that they would fall over like Charlie Brown’s tree when we hung anything on it. And before I was born, my Mom once used a tumbleweed as a Christmas tree, when she lived in New Mexico.

When our schedules cooperate, my husband and I go to Utah with our friends to get a tree from the forest there. And it is so much fun – her whole family piles into several trucks and we drive forever on bumpy unpaved roads to the location that her dad has scoped out already. And we walk, freezing, spreading out through the trees, searching for the perfect one. The great thing is that no one is rushed. No one gets impatient when I need to walk 100 yards back to the tree I saw before, just to see if it is better. They understand the fun of the hunt. And when everyone has their perfect tree, we throw them into the back of their pickups and head back to her parents’ house for hot soup and to warm up by the fire.

Tonight my husband and I will have our annual tradition of sitting by the Christmas tree after it’s decorated, with only the tree lit, and we’ll listen to Bing Crosby, sip eggnog, and sit and enjoy the calm of cold December night. I hope you all can find some quiet time by the tree, too.
Posted by Shannon at 9:12 AM No comments:

Labels: Bing Crosby, Christmas, home, Mom
Newer Posts Older Posts Home
Subscribe to: Posts (Atom)
ALL my images and text are Copyright Protected and may not be used for any reason without express written permission. © Shannon Cangey All Rights Reserved.