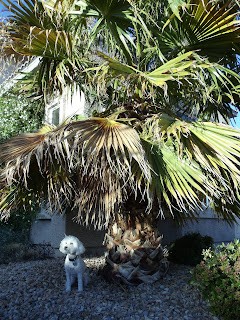 During the past few weeks, the Las Vegas winds have been brutal. I passed a vacant lot at the height of it and saw hundreds of tumbleweeds had collected in the downwind fence, creating a brown spiky sculpture.

It’s strange to see tumbleweeds in excess. When I grew up in southern Indiana, tumbleweeds were exotic – those lonely things that drifted across the road in old Westerns. When we took a trip out West one summer, Mom put one in her trunk so she could show her elementary art students. It hung on a string from the ceiling of her art room for years.

Another exotic item that is now commonplace for me is the palm tree. We have two in our front yard and even more in back, and I pass them on practically every road I drive in Las Vegas. But as a kid, I only saw them when we drove to Florida for vacation. In fact, it was a contest to see who would see the first palm tree. Usually it was me, and I would yell excitedly when I saw it.

What other things have now become commonplace in my life? Glitz, neon lights, celebrities, plastic surgery, slot machines, cacti, city-people, traffic…to name a few. All of these things were foreign to me in my little home town, but not necessarily as exciting as tumbleweeds or palm trees.

So, now I have changed. Now, the little things that were ho-hum in my little childhood life are now considered special…rain, thunderstorms, front porches, lightning bugs, football games on woods-surrounded fields, town festivals…towns in which the one stoplight was a novelty.

But the grass is always greener, right? I’m older and know not to take my palm trees, or my tumbleweeds, for granted. I live in an exotic place, and I can appreciate that.
Posted by Shannon at 11:40 AM No comments:

Can You Find the Hummingbird? 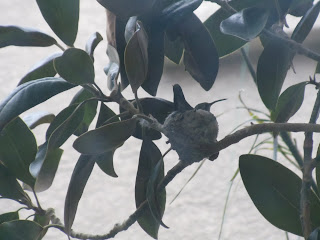 On Sunday night we watched TV as normal, while George obliviously slept curled into a ball next to us. When we went to bed, I looked back at our evening and realized all we had seen was depressing destruction. On 60 Minutes, we watched a story about the devastation in Japan. Then we watched two episodes of Anthony Bourdain’s No Reservations, one of which took place in Haiti and showed the poverty and hunger there, and the second which was in Cambodia and talked about the annihilation of much of the population there back in the 70’s.

And we spent the evening in the second floor of our cozy house, eating chocolate chip cookies and milk, petting our fluffy dog and stretching out on our oversized sofa.

Of course as we watched, I did the normal daydreaming about what I wish I could do to help these people. I imagined having a homeless Japanese family move into our guest room so they’d have a safe roof over their heads. I imagined adopting an orphan from Haiti and bringing him here for food and comfort. But those are just dreams; instead, I occasionally send a check to a charity to do my small part.

This weekend we had severe winds in Las Vegas, the kind that makes sucking-noises through our windows and blows everything outside into one corner of our yard. And all weekend, I was worried about the momma hummingbird who we recently discovered in a tiny golf ball-sized nest in our courtyard. Luckily she managed to stay in the nest even though the branch was whipping around. Worried, and wanting to do something for her, I put a hummingbird feeder in the courtyard and trimmed back a neighboring palm tree that was threatening to poke her when it moved in the wind. On Monday morning, she was still there, and I wished I could do something to warm up the courtyard for her. Turn on the Jacuzzi? Open the nearby window and turn on the heat? I daydreamed for ways to help her as I watched her before heading off to work.

Then as I neared my workplace this morning, I had to slow down early at an intersection because a tiny chipmunk had decided at the last minute to dart in front of my car. Luckily the light finally turned red, so I sat there and hoped he had run away.

While I waited, a woman got out of the truck behind me and approached my window. Great, I thought. She either thinks something is wrong with my car, or she’s coming to bitch at me for delaying traffic.

But I was wrong. “He’s under your car!” she said when I rolled down my window.

She was worried about the chipmunk just like I was! She bent down and said, “He’s just sitting there.”

I joined her outside and we both tried to scare him into the bushes. We never did see him run away, but I assume he did. We got back in our cars and drove away very slowly, just in case he was still around.

I may not be able to adopt a Haitian orphan or build a new house for a Japanese family, but I can acknowledge life when I can. We show our humanity by doing the little things that show we care.

Next Sunday night, I think we should watch Family Guy.
Posted by Shannon at 10:33 AM No comments: 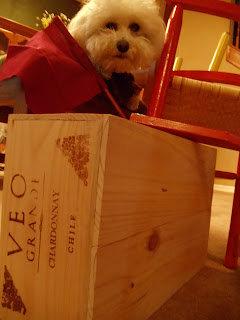 I spent Sunday afternoon crying. George didn’t even seem to notice, as long as I kept rubbing his belly. What, you ask, put me over the edge? It was PBS’ broadcast of the 25th Anniversary concert performance of Les Miserables.

(For those of you who aren't "theater people," this production is based on Victor Hugo's novel, and is a hugely popular musical that opened in 1985.)

It is almost cliché for a theatre person to like Les Mis. The snootier ones snub it as being too commercial, too pop, too popular. But I loved it long before it was popular to love it, before every Drama Club member or Thespian owned a Les Mis t-shirt.

Actually, the first time I saw the show, I didn’t like it. And, I slept through most of it. It wasn’t my fault, though. My high school theatre group had been to the Improv in New York City until 6am and then went to a matinee of Les Mis the following afternoon. We were destined to sleep – our seats were so far back that the actors were little dots on the faraway stage, and after all, it is three-hour-long, emotional show, which does not mix well with lack of sleep.

Three years later I sat third row center for the London production and was mesmerized. It was the first time I cried in the audience of a theater. Afterward I read the original novel and even did a school paper comparing the two. I even played the songs on the piano and of course sang "On My Own". I loved every bit of the show, every character. I think the best story is one that gives you reason to like the bad guys as well as the good ones. (Javert is my favorite.)

It’s easy to be moved by good theater. I’ve even put a CD in my car and cried to uptempo Broadway songs, just because they’re so damn good.

So, this Sunday I put in a load of laundry and then cried when Jean ValJean sang "Bring Him Home." I made myself some lunch and cried when Eponine died. I emptied the dishwasher and then cried when Fantine’s ghost appeared to take Jean Valjean “home.” And you can just picture me when the original cast members joined in for an encore.

I think it’s great to be moved to tears just because something is so good.

(p.s. I can't write all this without noting the fact that in this 25th anniversary production, Nick Jonas played Marius. He did a fine job, although his voice wasn't as strong as the rest of the cast.)
Posted by Shannon at 6:04 PM No comments: