The kids' magazine Penny Power inspired me quite a bit as a kid. It was full of all kinds of money-saving ideas: instructions for lemonade stands and yard sales, comparisons between the prices of fast food hamburgers, suggestions to make money by mowing yards or babysitting. Every month I got the magazine in the mail and eagerly read stories that made me want to fill my piggy bank.

In one issue, I was told how to have an official taste test at home. Mom and I had a longstanding debate about which brand of peanut butter was better – Superman brand, which we ate at home, or Jif, which I had at Grandma’s house. I followed the magazine’s instructions to the letter, including water to cleanse the palate between samples. In the end, I made my point: Mom could have sworn that the better one was her beloved Superman brand, but she actually preferred Jif. In this instance, Penny Power magazine led us to buy the more expensive brand. Oops.

I wish I could say that Penny Power caused me to learn about money at such a young age that I saved money every week, opened a savings account at age ten, and made my first investment by age twelve. But it did open my eyes to money earlier than most. And now, when I put a little extra money in savings or think about ways to cut back or alter our budget, I do get a little bit of the excitement I got when I read the magazine long ago. If nothing else, Penny Power made money friendly instead of a topic to avoid.

I wonder if Penny Power still exists. I’m tempted to order a subscription for the members of Congress. They need all the help they can get.
Posted by Shannon at 10:28 AM No comments: 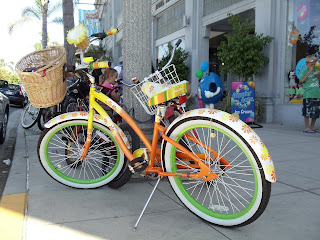 On beach vacations I am enamored by the beach cruisers everyone seems to own. People ride lazily by me with their towel/water/book in the front wicker basket, on bikes of every color. Many have flowers painted on the frames, or they have baskets lined with colorful fabric, or they have old-fashioned bike bells that chirp happily at me as they pass.

Mostly, I wonder about these people who own these bikes. To me, if you own a beach cruiser, it says a lot about your life. And I want that life! Let me explain.

A beach cruiser is not built for speed. It is clunky and has only one gear. It is meant for strolling – cruising - on the boardwalk while you watch the waves. Or it takes you on back streets toward the outdoor café where you park and sip a latte. Owning a beach cruiser means you have time to appreciate the small stuff.

Beach cruisers almost always have a basket on the front, which means when you ride one, you might be away from home for several hours. These baskets can hold your beach items or your picnic lunch or your dog, or can include your groceries when you have errands to run. A basket on your bike means you have things to do, but they’re enjoyable things. You won’t see a briefcase in a beach cruiser’s basket.

The owners of beach cruisers love their bikes and bedeck them to show their personalities. Local bike stores will carry every possibly color and style of basket, basket liner, helmet, bell, drink holder, and streamers – I have seen drink holders covered in plastic flowers, helmets painted with polka dots, and even small colorful flowers you can clip to your handlebars. Beach cruiser owners like embellishments, but they are simple ones, not flashy. Their focus is on fun.

This weekend we were in Coronado and I jealously watched these bike owners and almost bought a colorful bell to attach to my bike back in Vegas. But it wouldn’t be the same. A beach cruiser in the desert doesn’t make sense. It needs salt air and the sound of seagulls. And I guess, so do I.
Posted by Shannon at 12:18 PM 1 comment: 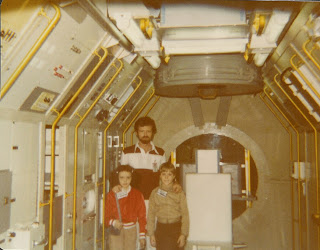 When I was a kid, I felt very important when I told other kids that my Dad worked for NASA. After all, I lived in rural Indiana where most men were farmers, so my Dad’s profession in the space industry was very exotic.

Every Summer I visited Dad in Huntsville, Alabama and got a special Security pass (with my name on it!) and was led through the off-limits areas of the Space & Rocket Center. The first time my cousin Jeff joined us, and Dad showed us the huge computer rooms (the computers themselves were huge back then) and the rooms with raised floors that were built so that all the computer cables could run underfoot. We also saw a shuttle engine, rockets, moon rovers, and we got to go to the gift shop and buy astronaut ice cream.

Being the inquisitive kids that we were, Jeff and I pretended we were reporters and carried little notebooks in which we jotted important information. In fact, I recently found my little notebook, and inside it were the names of everyone we met that day, in addition to random bits of information such as “Then we went in the skylab where they had all thier exspearimeants" and "I met a lady named Anita and I told her that was my mother's name and she said that's nice."

Being and “insider” and so connected to NASA, I got a little emotional Friday morning when I watched the last shuttle take off. I remember the day when a TV was wheeled into my elementary school classroom and we all watched the first shuttle take off years ago. That big white shuttle seemed so futuristic, so advanced, and yet also more attainable. Instead of being sent into space on a rocket and then returning by freefalling to the ocean in a little capsule, now astronauts were able to fly up in a giant white airplane and then land back home on a runway. Would we all get to fly up there someday?

Now there is an international space station where many nationalities meet and put us all as equals – just common people way up there, looking down at the small, quiet earth.

I am sad that the shuttle program has ended without anything to replace it. Now we will have to hitch rides with other nations’ astronauts and bide our time until we have another great urge to explore. I think the time will come, eventually. Aren’t we all programmed to gaze up at the stars and wonder? To think bigger than ourselves? I look forward to whatever is next.
Posted by Shannon at 9:04 PM No comments: 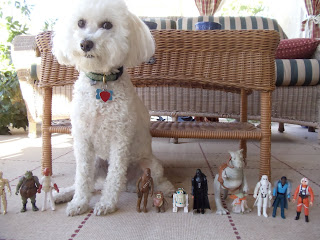 When Star Wars came out back in the Seventies, I saw it in the theater seven times. I was quite young, so I’m not sure how I got to go so often. This was before VCRs or Netflix or On Demand, so seven times was quite an accomplishment. We bought the soundtrack, I bought fan magazines with Carrie Fisher, Mark Hamill, or Harrison Ford on the cover, and I played with my action figures. I am still an ardent fan, and I cannot help pausing to watch if I catch one of the original three Star Wars movies on TV.

As a little kid, I was impressed by the high-tech space age special effects, but I was most engrossed by the characters. I wanted to be Princess Leia and marry Mark Hamill. I wanted to ride on a ton-ton, have my own R2-D2, and have a Wookiee for a best friend. I watched these movies and learned about good vs. evil, and about the Force that connects us all.

But the thing that stayed with me the most is the music. Mom and I used to put our Empire Strikes Back album on the record player on weekend mornings. I’ll never forget the first time we listened, when we tried to identify what had happened in the movie during each section of the music. I remember sitting on the living room couch when Mom recognized a specific piece of music.

“Shannon!” she said, turning to me with wide eyes.

I watched Mom crank up the volume. She continued, “this is the music for the Imperial Walkers!” She knew those tall things that walked across the snow-covered field to attack the rebel forces had really creeped me out during the movie.

Mom pointed out the window, toward the trees and road that led toward town. “Can’t you picture them?” The music continued its ominous melody, and Mom pretended to see them. “They’re coming toward the house right now!”

The music continued its creepiness, and I could so easily picture those Walkers on their slow heavy trek right toward us. I got chills down my spine. It was the first time I truly understood the power of music.

So now that I have John Williams’ great score running through my head, I’m going to go turn on the TV. I think that movie marathon might still be playing.
Posted by Shannon at 1:42 PM 1 comment: