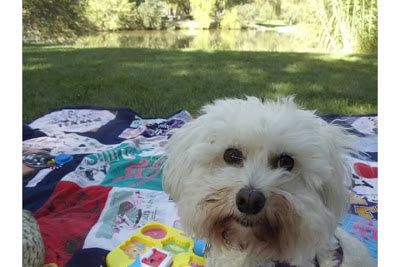 There is a homeless man who has recently been hanging out at an intersection I pass frequently, and I have to say he makes me smile every time I see him. Instead of looking down and out, this man is having a good time. Usually he is on the street corner dancing. But dancing puts it mildly - he is grooving. The song in his head is obviously slow and sexy.

Last week I was driving in the same area and saw a car stopped ahead by a road construction worker holding a sign. The car moved on, and as I approached I saw that the man was not a real worker; it was the dancing man. From somewhere he had gotten a yellow construction vest with the reflective stripes, and what I had thought was a big sign that he held up to stop traffic was actually an inflatable guitar. I wonder how many cars he stopped that day, and how long it took for them to notice something was amiss.

Although the man makes me smile, of course I can’t help but feel bad for him. I wonder where he sleeps at night, if he finds food. He reminds me to be grateful for all I have.

Recently I was asked if I consider myself “lucky.” I paused for a moment and then answered yes. There have been many moments in my life when I have been suddenly overwhelmed by the emotion of all I have, and of how lucky I have been to have seen the things I’ve seen, to travel and to get an education, to have friends and family and a home and a car. We are so lucky to live in a country where we can take for granted the things people in other countries would consider extreme luxuries.

What do you take for granted?
Posted by Shannon at 9:36 AM No comments: 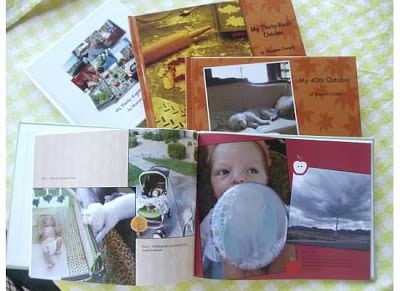 A few years ago I began a little project that I have continued annually ever since – my October Project. I want to share this idea with you in case you’d like to create your own version.

The year I began I called it “My 38th October.” (It was actually my 39th October but I couldn't bear to write that number yet!)  I took photos every day and then chose one from each day in October to put into a book and document that one month. I uploaded them into a book and labeled each with “Day 1,” Day 2,” and on, with a description in the caption describing what was happening. I tried to get creative with the photos and capture moments I might not always think about. This helped me appreciate each day and see each day differently. I took photos at the grocery and at my hair appointment, photos of dinner cooking on the stove, of the TV we were watching one night, election rallies, and more. Looking back, it is an excellent way of seeing the progression of our lives – just by looking at one month, one chunk of a year.

So far this month, Day One was George sitting on the very top of my freshly folded basket of laundry, Day Two was "Top of the Stove Cookies" in the pan melting on the stove, and Day Three was taken at work with my silly coworkers. Sometime this month I want to get a photo of my crocheting project that is taking over the floor in our TV room, and also a few pics of us outside enjoying the cooler weather on the weekends. Although I don't plan ahead too much, I want to make sure the month shows a good overview of our current life.

Inevitably, there are a couple of days when I am ready to go to bed and realize I didn't take a photo that day. Aargh! That's when I have to get really creative. What is interesting? My toothbrush? No. A photo of our TV room with the TV tuned to our favorite show? Maybe. Our sleeping son with his stuffed kitty tucked under his arm in his dimly lit crib? Even better.

Documenting one moment every day makes me look at the month and make sure it is truly memorable. It makes me get out and do the things that I've been putting off.

October is my favorite month. I like paying it tribute with this project. Is December your favorite? Maybe you should make your own “My Thirtieth December” or take your least favorite month and make it more fun by adding this project to it. 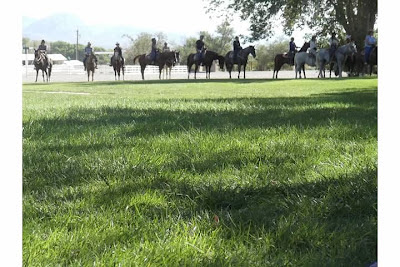 Another morning at Floyd Lamb Park, and our walk around the ponds, through the trees, gave us many interesting sights:

-         A large group of boys in matching shirts were on a day-long hiking trip throughout the park, after eating breakfast made on huge grills in the parking lot
-         Fishing families were clustered around the ponds, in the shade in makeshift morning camps
-         A jogging woman hurried past speaking in Chinese on her cell phone
-         A line of horseback riders crossed the desert in the distance
-         A lone turtle floated in one pond, the tip of his nose the only part above the water
-         An Asian man surveyed his student who practiced Tai Chi in the shade. He walked around him slowly, leaning over now and then to inspect his stance.
-         A kid on a bike with his jogging mom passed by us two times, their speed around the park much greater than ours
-         A man meets us, dragged by his two leashed golden retrievers
-         A young couple eats breakfast at a picnic table
-         A grandma holds her granddaughter on her lap, watching the geese on the water before them
-         Two kids begin feeding ducks only to be instantly mobbed by hungry ducks and geese
-         A grandpa shows his grandson how to put a worm on a hook
-         One of the boys from the hiking group sits alone under a tree, upset by something another kid said, and a dad approaches and tries to make him feel better
-         A guy reads a newspaper while lying on his back in the grass

Then, from our blanket:

No need to look at my watch. That is the best kind of day.
Posted by Shannon at 10:59 AM No comments: