Things to Love about Las Vegas...#2

I've heard that Las Vegas ranks very low in the parks to people ratio. But luckily, the parks that do exist here can be pretty special. For example, there's Centennial Hills Park in the Northwest, which many residents call the Butterfly Park, due to the huge flowers and butterflies that were installed to provide shade. In addition to a dog park, soccer fields, an amphitheater, a water play feature, giant statues of lizards and turtles, and several playgrounds, this park also has a dinosaur walk, where it tells about the creatures that lived here thousands of years ago...mammoths, giant sloths, etc.

Another park near us has a Frisbee golf course. Another is at the base of a mountain where there is a trail that takes you to the tip-top of Lone Mountain. One of our favorite parks has a dog park that covers a large part of a retention basin. It also has a jogging path with one of those springy surfaces, tennis courts, and a huge jogging path around the whole park that must be a mile or so in length.

And of course, there's the ultimate, Floyd Lamb Park. I've written whole posts about it before.

Whoever plans these parks has the perfect job. I would love to use my creativity to think up things that help the community and make it a better place to live. Luckily, Las Vegas has people who do just that. 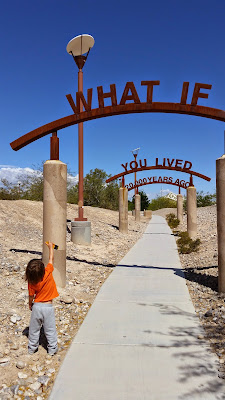 Posted by Shannon at 1:14 PM No comments:


I'm at home this morning with the windows open, enjoying the cool air and the sound of rain. It's May 18 in Las Vegas, and I'm wearing jeans and a sweater. Heaven! I'll take anything that prolongs the heat of a desert summer.

As much as I love rain, the sound of thunder is even more special. It's something we rarely get. When we do have storms, we'll get some rain and lightening, but usually without thunder. It's very strange - there is no release when you don't get the boom of thunder. Vegas storms are a tease. They creep over the town, become dark and menacing, shoot some scary lightening across the sky, but all in silence. We need the sound of rain and the booms of thunder. Otherwise, we are still waiting, for that cathartic release.

Today we got it all - dark clouds, hard rain, lightening, and booming thunder. George and I even went to the dog park in the rain and got wet and muddy.

Thank you, Las Vegas, for a lovely morning.