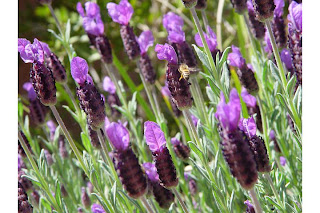 I stood in the backyard this week and stared at the lavender that is growing tall and blooming bright purple right now. There were five bees enjoying them, too, their buzzing punctuating the air as they moved from blossom to blossom, their engines starting and stopping every time. I watched them for quite a while, marveling at their little wings that make such noise.

I don’t think I’ve ever been stung by a bee; surely I would remember if I had. More likely I was stung by a wasp – a much less appealing bug compared to the adventurous, hardworking bee. Wasps are silent and fly around slowly, awkwardly, with their limp legs hanging blow them like bug zombies. Or maybe they’re not legs, but I imagine them to be.

Some bugs gross me out, such as centipedes (which I’ve only seen on TV) and those huge fat green tomato bugs - I don’t even like to look at them. But coming from the Midwest, where bugs are part of life, most bugs don’t bother me. It was okay to pick up a Daddy Long Legs by the leg and throw him outside if he happened to wander indoors; I don’t think I’d want to touch many bugs in the same way, but who could resist one with such a friendly name?

And a lightening bug was fine to catch and hold cupped in your hands so his light shined through your fingers, then open your hands up to watch him walk around for a bit before spreading his wings and flying off again.

Lady bugs are fine to touch, but don’t squish them because they stink. And rolly-pollys are fun to poke lightly with a stick so they’ll roll up into a perfect tiny grey ball.

So far I can’t find any fun bugs in Las Vegas. Like the desert, bugs here are big and harsh and hardy, sometimes with spikes and weird shapes, looking like aliens. So I will continue to watch the jovial bees in our yard and will continue to plant flowers and bushes that they, and their hummingbird friends, like. I want to invite some nature into our yard, even in the middle (or outskirts) of the big city.
Posted by Shannon at 9:13 AM